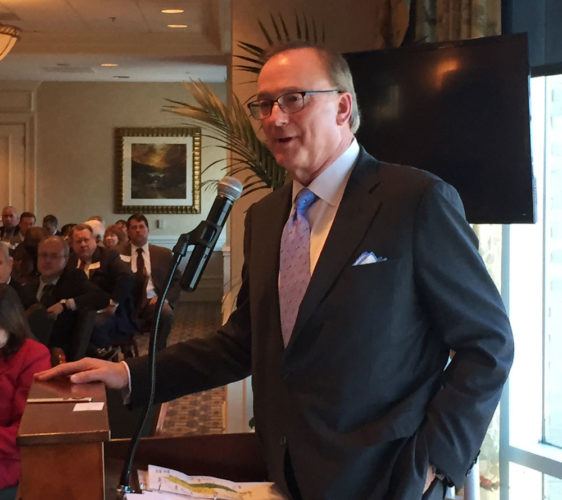 Atlanta Regional Commission Chairman Kerry Armstrong addressed the members of the Gwinnett Chamber of Commerce at their monthly luncheon on Wednesday, saying that the Atlanta region is ready to be a rockstar on the world stage. Armstrong, who has been at the helm of the area’s metropolitan planning organization for just over a year, brought the audience up to date on three areas the ARC works with, including the area’s aging population, transportation and mobility, and water.

Comparing the baby boomer generation to an elephant moving through a python, Armstrong said the commission was trying to figure out how to prepare the region for an older population. As the population ages, some would prefer not to drive, and many older people will want to want to downsize from their standalone housing. Admitting the issue was one that is always on the table, he noted the bright spot that many millennials have the same interests as the older generation, so a solution for one would be of benefit to the other.

Addressing transportation, Armstrong said that for the first time in his career, he sees a resolve to solve the region’s mobility issues, especially from the Governor, Lt. Governor and the Speaker of the House. Armstrong hopes the legislature will find a solution that is big enough and bold enough to make a difference, noting that an additional $150 per year per car would double the amount the state currently spends on constructing and maintaining its roads and bridges. He admitted that, while we know the solutions, the challenge is how to pay for them.

Ensuring an adequate water supply in the region is a long running challenge the ARC and the state need to address. After it seemed that the Florida-Georgia-Alabama water wars had been mostly resolved, Florida filed suit against Georgia over the amount of water taken from the Chattahoochee, and especially Lake Lanier. Late last year, the Supreme Court agreed to take the case, and appointed a special master to oversee the process and find facts. With the special master in place, the court would like to see some resolution within three years, as opposed to the more typical 8-10 year timetable a case like this would take.

Meanwhile, the state has filed a lawsuit against the Army Corps of Engineers, hoping to force them to specify the region’s rights to withdraw water from Lake Lanier and the rest of the ACT water basin in their Water Control Manual–something they have been reluctant to do in the past. Armstrong admitted he didn’t know what the Corps might eventually decide, but that having something solid to go on would be better than the current lack of guidance.

The one bit of good news on the water front was the appointment of 7th District Congressman Rob Woodall to the House Transportation and Infrastructure Committee, the first time a Georgian has been on the committee that makes important decisions regarding not only roads and transit, but ports and waterways as well. He noted that both Florida and Alabama have long had representation on the committee, and that Woodall’s appointment would level the playing field a bit.

Noting such milestones as the 54,000 jobs added in the region over the last year, and the fact that the regional GDP is the tenth largest in the country, and larger than the GDP of 33 states, Armstrong said he was positive about the future. Yet, noting that the area’s population of 5.2 million is expected to grow to over 8 million by 2040, he admitted that challenges lie ahead. But, he said, regional leaders are willing to work together to find solutions for the common good of the area. And, that’s a major reason he is more optimistic than ever.