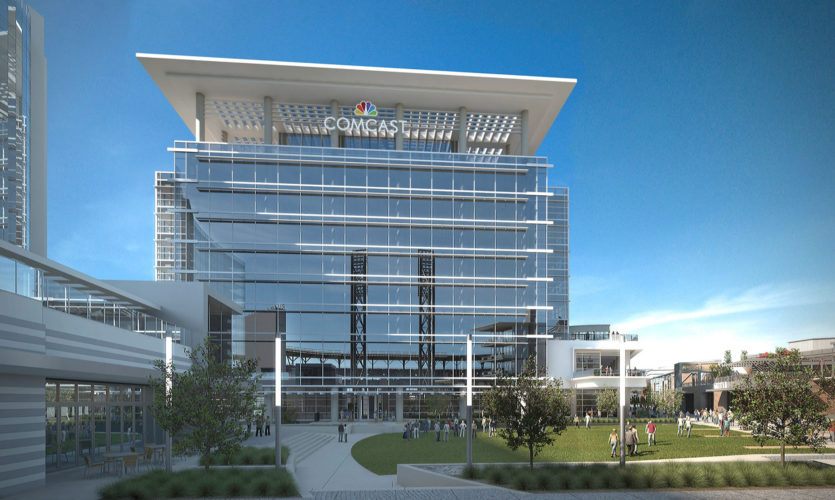 A 250,000-square foot building for Comcast in the Atlanta Braves’ Battery Atlanta development at SunTrust Park is among three finalists in the Office category of Atlanta Business Chronicle’s Best in Atlanta Real Estate Awards.

Developed by Pope & Land Enterprises, Inc., The Braves’ office development partner in the Battery, the nine-story tower will be a divisional headquarters for Comcast, and will be 100 percent occupied by more than 1,000 of its employees. Construction is slated to be complete in 2017.

A major feature of the new building will be Comcast’s Innovation Lab, a dedicated home for the company’s growing workforce of technologists, engineers and software architects.

With the Innovation lab, “We think the building will have a unique buzz,” said Bill Connors, president of Comcast’s Central Division.

The first significant speculative suburban office building to get underway in the Atlanta market since before the Great Recession, Riverwood 200 is another Office Deal finalist.

Started in June, Riverwood 200 is a 12-story, 299,000 square foot office tower located in the eight-acre Riverwood development in Cumberland Galleria.

As previously reported by Atlanta Business Chronicle, the bank will lease approximately 100,000 square feet on four floors of the new building, which will be located at 3400 Overton Park Drive S.E., next to Interstate 75 and the Atlanta Braves’ new SunTrust Park.

Synovus is consolidating at least part of the bank’s existing office locations here. A mid-2017 opening is planned.